Some problems are hard to talk about. However, we have chosen the path of honesty with our readers. We’ve already told you about numerous interesting events and places in Moscow, but now we would like to share with you the pain of our city.

Like many Russian cities, Moscow experiences problems with homeless animals. One comes across stray dogs and cats in many places around the city. What makes this issue so striking is that most of them used to be pets, but were thrown onto the streets at some point; people often don’t recognize the responsibility involved when buying a pretty puppy or kitten.

Sometimes media and social networks publicize stories in which a pet was found half dead with severe injuries which had been inflicted by people. There is even a group of people in Moscow known as ‘Dog hunters,’ whose aim is to catch and kill homeless animals. These stories make for difficult reading; however they are a part of Moscow life.

Fortunately, apart from these irresponsible and cruel people,there are many kind and selfless ones in the city. In the country where there is no working legislation on animal rights it is hard to do much for these helpless creatures. However hard does not mean impossible. 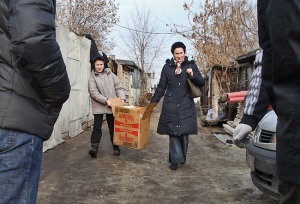 There are several shelters for homeless and stray animals in the Moscow area. Some are state-owned, while others are private. Although state shelters are sponsored by the government, they are not the best places for animals to live: the official donations are small; the numbers of dogs kept here is much higher than in private shelters; the conditions are poor; and lots of animals die during the harsh Russian winters or are euthanized if after a certain period they have not been adopted. The ‘Kozhukhovskiy Municipal Shelter’ cares for more than 2,500 dogs and 150 cats, while the number of volunteers who work there is only 30. Most of their time is dedicated to fundraising and dog promoting, as the main goal of every shelter is to find a new host family for each pet.

Another state-owned shelter is situated in the Ostankino district- not far from the famous Ostankino TV tower. They help homeless animals constantly, and have web pages in English at:https://priuts.ru/en, and in German at: https://priuts.ru/de.

Private shelters have better conditions and the animals here are not euthanized. However, they depend on private donations and help even more than those sponsored by the government. From time to time activists and volunteers meet up to go to one of the shelters. They organize collections among friends, colleagues, acquaintances and social networks. They collect not only money, but also food, warm blankets, medication, and arrange the vaccination of the animals. Recently there have been trips to the private shelters ‘Alma’, one situated at Zorge Street and ‘Zov Predkov’ (The call of the wild in English). You can join the latter’s Facebook page at:https://www.facebook.com/zovpredkov.eng. Two other shelters don’t have English pages, but if you wish to get involved in turning these homeless animals’ futures around, contacts are https://shelter-alma.nethouse.ru/#feedback

In addition to the shelters, there are also several international charity organizations fighting for animal rights and helping to make their lives easier. ‘LAPA’ (https://www.lapauk.org) is a Russian and UK based organization that collects donations and helps get animals adopted. The Russian department of the international charity organization ‘Giving Hope’ (web page in Russian https://www.ghope.ru), also has many programs to help animals.